This is a list of resources that partners, family or friends may find helpful. This should not be considered a list of recommended books. Click on the books to read online reviews and descriptions to decide if a book is suitable for you. 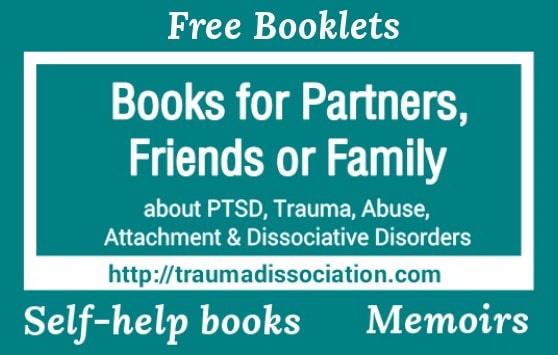 A similar book, I'm Not Alone: A Teen's Guide to Living with a Parent with Mental Illness is also on the authors' website.

How You Can Survive When They're Depressed: Living and Coping with Depression Fallout
by Anne Sheffield (1999).
ISBN 0609804154

Loving Someone with PTSD: A Practical Guide to Understanding and Connecting with Your Partner after Trauma
by Aphrodite T. Matsakis (2012).
ISBN 9781608827862

My Daddy Has PTSD: An Illustrated Story Book to Help Children Understand PTSD
by Casey Sean Harmon (2015).
ISBN 1634498054
Written by a veteran.

When Someone You Love Suffers from Posttraumatic Stress: What to Expect and What You Can Do
by Claudia Zayfert and Jason C. DeViva (2011).
ISBN 1609180658
Written by psychotherapists, includes chapters about PTSD from Sexual Abuse, and PTSD from military service.

Shock Waves: A Practical Guide to Living with a Loved One's PTSD
by Cynthia Orange (2010).
ISBN 1592858562
Written by the wife of a Vietnam vet, but not specific to PTSD from military service.

She Won't Feel Like This Forever: A Book for Children with Mothers Suffering PTSD
by Lindsey J. Crockett (2015).
Published by the The Australian Birth Trauma and PTSD Treatment Centre, relevant to all kinds of PTSD.

Beyond Consequences, Logic, and Control: A Love-Based Approach to Helping Attachment-Challenged Children With Severe Behaviors
by Heather T. Forbes and B. Bryan Post (2006).
ISBN 0977704009

Written by The Association for Training on Trauma and Attachment in Children.

Supporting Traumatized Children and Teenagers: A Guide to Providing Understanding and Help
by Atle Dyregrov (2010).
ISBN 1849050341 / 9781849050340
Particularly relevant to professionals working with or caring for traumatized children, including school counselors and foster carers.

For Families or Partners of Veterans (Combat PTSD)

After the War Zone: A Practical Guide for Returning Troops and Their Families
by Matthew J. Friedman and Laurie B. Stone (2008).
ISBN 1600940544

Jointly written by Matthew J. Friedman, who is a former Executive Director of the U.S. Department of Veterans Affairs

DID, DDNOS and Borderline Personality Disorder

Amongst Ourselves: A Self-Help Guide to Living with Dissociative Identity Disorder
by Tracy Alderman and Karen Marshall (1998).
ISBN 1572241225

Jointly written by a woman with Dissociative Identity Disorder and her partner, who is also a therapist. The book is not specifically aimed at partners but includes regular thoughts and perspectives from partners.

Loving Someone with Borderline Personality Disorder: How to Keep Out-of-Control Emotions from Destroying Your Relationship
by Shari Y. Manning (2011).
ISBN 1593856075

Written by a parent with Dissociative Identity Disorder.

Overcoming Borderline Personality Disorder: A Family Guide for Healing and Change
by Valerie Porr (2010).
ISBN 0195379586
Aims to help partners, parents and older children of someone with BPD to understand the disorder, and learn better ways of responding to BPD behaviors, including validation and acceptance. Based on skills from Dialectical Behavior Therapy, this book is aimed at improving family relationships (not attempting to control a person with BPD).

Someone I Know Has Multiple Personalities: A Book for Significant Others-- Friends, Family, and Caring Professional
by Sandra J. Hocking (1994).
ISBN 1877872083

Stop Walking on Eggshells: Taking Your Life Back When Someone You Care About Has Borderline Personality Disorder (Second Edition)
by Paul T. Mason and Randi Kreger (2010).
ISBN 1572246901 / 157224108X
Part of the well-known Eggshells series.

Family and Friends' Guide to Domestic Violence: How to Listen, Talk and Take Action When Someone You Care About is Being Abused
by Elaine Weiss (2003).
ISBN 188424422X

Memoirs by partners or families

Memoirs are about people and their experiences - not 'disorders'. Some do not focus on symptoms/disorders at all, and many people's difficulties don't fit neatly into the classification system. Most people who have trauma-related disorders also develop additional diagnoses or problems as result. Virtually all trauma memoirs contain distressing details, and may cause anxiety or fears that your loved one may deteriorate, may not survive — or the opposite: that he or she may not be improving "quickly enough" compared to the person you are reading about.

The effects of past trauma or a dissociative disorder vary greatly between different people. Some people with Dissociative Identity Disorder, for example, are never admitted to hospital, and a minority of people with PTSD recover quickly or without professional help — yet others committed to healing make slower progress, have fluctuating levels of symptoms or regular crises. Not all these memoirs are stories of hope and recovery - a few end in death.

Use the feedback form to suggest any self-help books or non-military PTSD memoirs you would like to see included here.

Books for Partners about Trauma and Dissociation. Traumadissociation.com, retrieved from .

This information can be copied or modified for any purpose, including commercially, provided a link back is included. License: CC BY-SA 4.0