Dissociative amnesia is the most common Dissociative Disorder. There are several different types of amnesia, and many different causes. Dissociative Amnesia is not caused by head injuries or physical damage to the brain, it is amnesia which has a psychological cause. It can occur as part of a number of other mental health conditions, including posttraumatic stress disorder and acute stress disorder, dissociative identity disorder, somatoform disorder, and anxiety disorders, [3]:298, [7] in any of those cases it would not be classed as a separate disorder. Dissociation Amnesia can last for between a few days to a few years, but is typically less than a week.[4] The period of time which cannot be remembered can range from minutes to decades.


Dissociative amnesia explained, the second part of the video involves a case caused by the suicide of a loved one.


The DSM-5 states that the key characteristic is "the inability to recall important autobiographical information that:
Because there is no neurobiological damage or toxicity, and the difficulties are in retrieving a memory which was successfully stored, the amnesia is always "potentially reversible". [3]:298-299, [7] Neurocognitive disorders involving memory loss usually include cognitive (thinking) and intellectual impairments in memory, these are not present in people Dissociative Amnesia. [3]:300-301

Dissociative amnesia is more likely in people with a history of multiple adverse childhood experiences (especially if they include physical or sexual abuse), people who have experienced interpersonal violence (for example, domestic violence or physical assaults), and the risk increases with the "severity, frequency, and violence of the trauma". [3]:298-299 Clinical interviews to diagnose Dissociative Amnesia include the SCID-D (revised) by Dr Marlene Steinberg, and the Dissociative Disorders Interview Schedule (DDIS). Both of these are capable of diagnosing any dissociative disorder and a number of other disorders as well. [1]:124 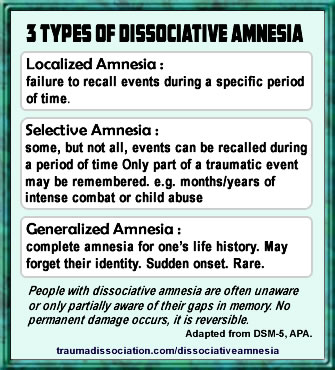 The three common types of dissociative amnesia are localized amnesia, selective amnesia (which may occur along with localized amnesia), and generalized amnesia. Generalized amnesia may involve the complete loss of a person's identity, in addition to all memories of their past.
Other forms of dissociative amnesia can also occur; people with generalized amnesia (the most severe type) may also lose semantic knowledge (previous knowledge about the world) and procedural knowledge (forgetting well-learned skills). [3]:298-299 Systematized amnesia is amnesia for a category of information (e.g., no memory of family, no memory of a specific person, or childhood sexual abuse). Continuous amnesia is unable to form new memories. [3]:298-299 Micro-amnesias are also typical in dissociative disorders, the amnesia is for very, very brief periods of time. The International Society for the Study of Trauma and Dissociation gives the example of forgetting the contents of a conversation from one moment to the next. The person may struggle to work out what was discussed while trying to avoid the other person realizing this. [7]
Dissociative Amnesia has been previously known as Psychogenic Amnesia, and Hysterical Amnesia.

The newly released guide to diagnosing mental disorders is the DSM-5, released in 2013.[3] gives the following diagnostic criteria:

Code 300.12
Specify if:
Code 300.13
"With dissociative fugue: Apparently purposeful travel or bewildered wandering that is associated with amnesia for identity or other important autobiographical information."

During a Dissociative Amnesia with Fugue, a person normally acts in a way which is purposeful and has a specific goal; fugue states may last for days, weeks, or longer. A fugue occurs when there is sudden and unexpected travel away from home or work in combination with amnesia for a person's past, and either identity confusion or assumption of a new identity. [3]:301, [7] Dissociative Fugue is also known as Psychogenic Fugue,[7] and was previously a separate diagnosis, but is combined with Dissociative Amnesia in the DSM-5.

An experience of Dissociative Fugue

People experiencing a fugue appear normal to others, and are often unaware of their amnesia. [7] It can be distinguished from amnesia and the aimless wandering sometimes present during seizures using tests such as EEGs to establish if there is a relationship between seizure activity and the amnesia. [3]:301

The last edition of the International Classification of Diseases, the diagnostic guide published by the World Health Organization is the ICD-10, published in 1992 with minor updates since. [2] Dissociative Amnesia and Dissociative Fugue are separate diagnoses within the ICD manual. The draft ICD-11 criteria gives these descriptions:


"Dissociative amnesia is characterized by an inability to recall important autobiographical memories, where recall would be expected and is inconsistent with ordinary forgetting. The extent of amnesia varies, but most commonly involves memories of recent traumatic or stressful events. There is no evidence that the symptoms are due to the direct effects of a substance or medication, including withdrawal, to exhaustion, to head trauma, or to a neurological condition (e.g., temporal lobe epilepsy). The symptoms are not better explained by another mental and behavioural disorder or by a sleep-wake disorder. The symptoms are sufficiently severe to cause significant distress or impairment in personal, family, social, educational, occupational or other important areas of functioning."
Also known as "amnesia neurosis" or "psychogenic amnesia".[6]

Differences between the ICD-10 and Draft ICD-11


Dissociative amnesia now clearly excludes amnesia caused by head injury (commonly known as Traumatic Brain Injury), and refers to stressful events rather than only traumatic events as a likely cause. Dissociative Fugue now states that it must last at least a few days, and include either identity confusion or identity alteration. [5,6]
Also important is the fact that the group these disorders are part of has been renamed from Dissociative [Conversion] Disorders to just Dissociative Disorders. Descriptions may be changed when the final ICD-11 is published.

Dissociative Amnesia in the ICD-10


"The main feature is loss of memory, usually of important recent events, that is not due to organic mental disorder, and is too great to be explained by ordinary forgetfulness or fatigue. The amnesia is usually centered on traumatic events, such as accidents or unexpected bereavements, and is usually partial and selective. Complete and generalized amnesia is rare, and is usually part of a fugue (F44.1). If this is the case, the disorder should be classified as such. The diagnosis should not be made in the presence of organic brain disorders, intoxication, or excessive fatigue." [5] Exclude.: alcohol- or other psychoactive substance-induced amnesic disorder, amnesia not otherwise specified, anterograde amnesia, retrograde amnesia, nonalcoholic organic amnesic syndrome, postictal amnesia in epilepsy [5]

Dissociative Fugue in the ICD-10


"Dissociative fugue has all the features of dissociative amnesia, plus purposeful travel beyond the usual everyday range. Although there is amnesia for the period of the fugue, the patient's behaviour during this time may appear completely normal to independent observers." [5]

Most cases of Dissociative Amnesia last less than a week.[4] Severe cases (acute amnesia) are treated by providing a safe environment, free of threatening stimuli, which may be enough for memories to return. Medication may also be used during interviewing. When memories return psychotherapy should be used to identify and discuss events that triggered the Dissociative Amnesia, and to explore effective coping mechanisms.[7] Chronic amnesia refers to longer term amnesia; long-term psychotherapy is the recommended treatment, and medication to address the amnesia is not recommended. Psychotherapy should aim to help process and integrate the traumatic and dissociated material. Hypnosis may be ease the process of working through trauma. [7]

Dissociative amnesia occurring with fugue should be treated as soon as possible; psychotherapy is the recommended treatment. This should involve a safe environment for therapy and a strong therapeutic alliance. Treatment goals include the recovery of the person's identity, identifying the triggers linked to the start of the fugue, and working through the traumatic material. Medication given during interviews, and hypnosis may be also help.[7] Recovery is often rapid. [8] When memories begin to return a person often experiences emotions such as grief, rage, shame, guilt, depression and inner turmoil. Many people with Dissociative Amnesia develop Posttraumatic Stress Disorder at some point in their lives. [3]:302

Dissociative Amnesia & Fugue. Traumadissociation.com, Retrieved from . This information can be copied or modified for any purpose, including commercially, provided a link back is included. License: CC BY-SA 4.0
© Copyright TraumaDissociation.com – Creative Commons Attribution-ShareAlike 4.0 International License